The city of Castellón

Castellón de la Plana is a Spanish city and municipality, the capital of Castellón province and the Plana Alta region, located in the Valencian Community. The city is located in the east of the Iberian Peninsula, on a flat area surrounded by different mountain ranges inland and the sea in the east. Its coast is 10 km long and its urban center is 30 m above the sea level, within a four-kilometer distance from the coast.

In 2018, Castellón had a population of 170,888 inhabitants and a metropolitan area of around 300,000 inhabitants, which make it the fourth biggest Valencian city in terms of population, distributed between two urban centers and diverse population groups spread over 107,50 km2 of its municipality.

The city can be divided into three main parts: the historical nucleus, new modern districts and el Grao, or the harbor, located by the sea.

The climate is excellent, which is always an advantage. In the downtown with ample cultural and commercial offer, one can enjoy typical Mediterranean lifestyle full of joy as well as the hustle and bustle. The historical downtown, where visitors can admire the form of the Roman campgrounds, is where most significant monuments are to be found. This nucleus, which was established over the ancient Arabic villages, was granted the town charter by Jaime I in the 13th century. The districts on the outskirts have sports and cultural facilities, while el Grau, the seafront district located between the nucleus and the sea, offers numerous marine tourist activities.

The Castellón urban complex can only be properly understood if one takes into consideration a modern and open-minded mentality of its inhabitants. There has always been interest and desire to be up-to-date and open to visitors. And that is what the city offers, along with a great variety of attractions: sea, nature, monuments, culture, mountains, festivities and others.

The Spanish Federation of Schools of Spanish of the Valencian Community suggests the following venues as must-see attractions if you go to Castellón:

A relaxing walk through the city and its surroundings is the best way of discovering its charm. Cities of the size of Castellón offer their visitors the advantage of getting to know all their territory, and the best manner of doing so is on foot.

The old Palacio de la Vila (Vila Palace) was located in a different place, close to its current premises.

The building is a free volume structure elevated on three units clearly differentiated by cornices which separate them.

The ground floor is made of a portico formed by molded round arches and pilasters with Tuscan style capital in between. There are five arches on the front and one more on each lateral making a total of seven arches. The first floor is separated by Corinthian pilasters with smooth entablature and has three balconies. The five windows on the balconies alternate and are surmounted by either triangular pediments with pyramidal top or semicircular pediments with a scallop decoration. These are then separated by columns and composite capitals.

The third level has smaller dimensions and is separated from the first floor through a cantilever ledge. The vertical division utilizing Corinthian pilasters with entablature continues on this floor too. There are five plain balconies, smaller than the ones on the first floor which overlook the Main Square (Plaza Mayor). The pilasters are double at both ends and single at the center. At the very top of the building there is an antique balustrade ledge.

The Fadrí end the co-cathedral

It is located in the Mayor square, in the center of the city, next to the church of Santa Maria la Mayor. The construction works began in 1440. This tower was finally finished in 1604 after many years of uncertainty about its construction and how to build it. The project of Francisco Galiansa de la Lancha, Guillelm del Rei, Pedro Crosali, Marc Volsanys, Antoni and Joan Saura was chosen to build the Fadrí.

It’s a free, octagonal bell tower with an approximate height of 60 meters. It is divided into four bodies, which correspond with the camera’s clock, the ecclesiastic prison, and house of the ringer and the chamber of the bells. These four inner bodies do not correspond with the exterior cornice lines. At the top is a banister decorated with eight gargoyles.

It represents Spanish architecture of the late sixteenth century very well, in fact the building is characterized by a simple architecture, without decoration and a kind of formal roughness typical of those years.

The Tower is topped with a spire of 1735, replica of the original destroyed in 1656, which is of triangular plant with pilasters of Tuscan order covered with blue tile and topped with a weathervane in 1860. Inside, a discontinuous intrados spiral staircase gives access to the various floors of the tower, whose rooms have stone vaulted roof. The tower is accessed through a cover upper with a niche at the top, flanked by scrolls, and a pediment triangular at the top. Under the arms of the Kingdom of Valencia and Castellón towers, there is an inscription in the lintel which refers to the construction of the Tower between 1591 and 1604.

The Fadri is listed as asset of Cultural Interest and is registered in the National Heritage and Cultural Heritage of the Valencian Autonomous Government.

The Church of Santa Maria la Mayor is the co-cathedral together with the Segorbe. Both are the seat of the Bishop of Segorbe-Castellon. The history of this Cathedral is full of ups and downs since the beginning of its construction dating back to the 12th century.

From the original Gothic church only remain its three access doors, as well as ornamental elements. The temple was demolished by the municipal plenary session agreement in the 1930s and reconstruction work culminated finally in 2001. The oldest door is located in Arcipreste Balaguer Street.

Access by de la Hierba square presents vegetal decoration on the capitals, while the main entrance is a Gothic more advanced than the previous. Inside is an image of the Immaculate Conception of the eighteenth century, Baroque images, several interesting canvases as well as jewelry pieces and other ornaments.

The Cathedral of Santa Maria is classified as asset of Cultural interest, and ranks inscribed in the National Heritage and Cultural Heritage of the Valencian Autonomous Government.

Columbrete Islands are located thirty nautical miles off the coast and have been part of Castellón municipality since 1955. They are made up of 14 islets of volcanic origin. They are of great environmental interest due to the fact that they are home to some of the species endangered with extinction, such as the Eleonor falcon, the Audouin and Corsican seagulls, and its coastal waters form a Fish Reserve of paramount importance that contributes to the restoration of numerous species of fish in the zone.

Columbrete Islands are also a popular destination for scuba diving fans, as their waters are crystal-clear and abundant in a great variety of animal species and plants.

Columbrete Islands Natural Park was established in 1988 by the Valencian Autonomous Government. Its area covers 19 ha of land surface and 4,000 ha of water surface. Its geographical location is 39º55’N, 0º40’E.30

La Playa de Gurugú (Gurugú beach) is known as the section of Castellón’s coast which goes from the crossroads of El Camino de la Plana to the mouth of the Río Seco. It´s an extensive beach with a promenade, which flanks the highway between Castellón and Benicàssim.

This beach gets its name from the nearby pine forest which a good part of has been preserved and is known as Parque del Pinar. This wonderful space is divided into two clearly different areas: an open which is open to the public and utilized as a recreational area and even hosts renowned events.

The second area includes a 9-hole municipal golf course, managed by the Club de Golf Costa Azahar, which offers a social club, tennis courts, and other facilities. It is an ideal place to combine a game of golf with a day at the beach.

The most distinguishing element of Serredal beach is that there is an area dedicated to the protection of the dunes, and where vegetation has been developed for the nesting of the Kentish Plover. This environmental protection measure is compatible with the swimming areas, thanks to good signposting and to the public’s sensitivity. There are clearly marked paths that guide beachgoers between the plants and dunes to the sea. 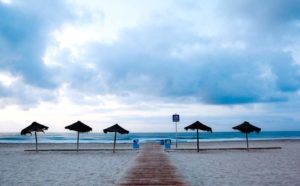 Mary Magdalene Festival is the festivity for the foundation of Castellón and it lasts for 9 days. Two of the most important meeting points in these days are Mesón del Vino and Mesón de la Cerveza, where you can also taste Spanish tapas and enjoy a festive atmosphere of the city. Towns that you should not miss are: Morella (a medieval, completely fortified town), Peñiscola (crowned with a spectacular Papa Luna castle), Vall D`Uixó (known for its original Grutas de San José, navigable routes by which you can get to the heart of the world of fantasy, light and color, formed by stalactites and stalagmites), Benicàssim (famous for its marvelous beaches, it´s where to one of the major International Festivals of Independent Music, FIB, is held as well as the Harley Davidson fans reunions) and Villafamés (where the Museum of Wine is worth mentioning)

We use our own and third-party cookies that are installed on your computer to perform analysis of use and measurement of the Web to improve our services and facilitate your navigation. If you continue browsing, we understand that you accept its use.You can change the settings or get more information here